Culture and SocietyNational dances of the CaucasusNews 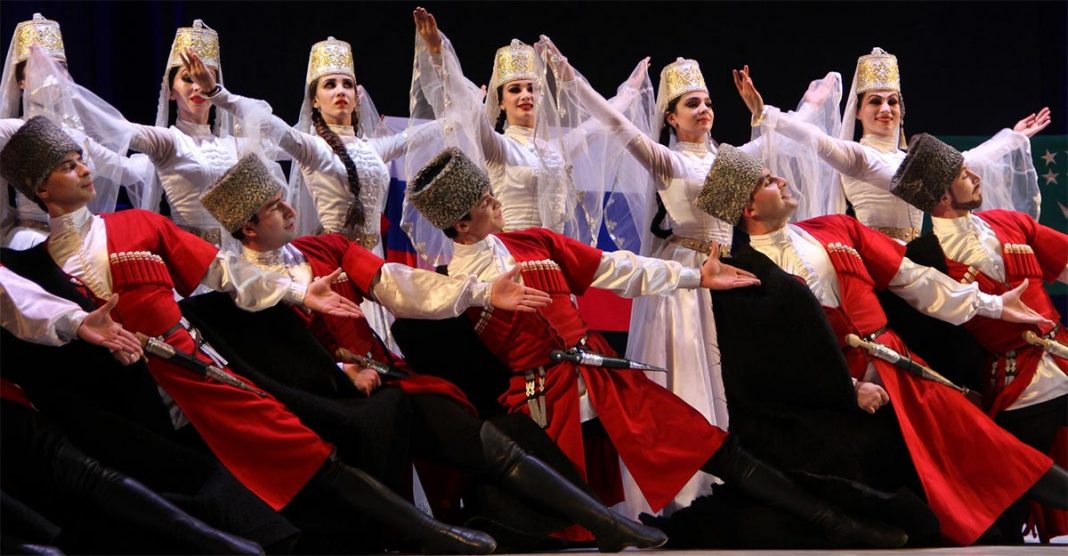 The formation of the folk dance culture of the Circassians over the centuries was not easy and in constant search. The historical and social sources of the appearance of their own folk choreography in Adygea were folk traditions, psychology and creative thinking of the people.

Self-expression in dance acquired over time special forms, techniques and character, and became part of the rich cultural heritage of the republic. It is believed that the impetuousness of the dancers and the speed of folk dances completely shifted from the Adyghe warriors who participated in numerous Caucasian wars.

Syncopic rhythm is a consequence of the horse's running, translated into dance movements, and its perception by riders - warriors. There are also the best qualities of the Circassians in these dances - pride, modesty, heroism and fortitude. For the Adyghe, dance is like a manifestation of the foundations of life, a kind of model of his life.

Dancing was always a favorite entertainment in Adygea: at holidays, weddings, any solemn and joyful occasions music, singing, clapping and, of course, the dance with jumps and unusual sharp movements sounded.
For a long time, Circassians have preserved original dance tunes and theatrical pantomimes with dance performances (dzheguaco, ajgafy).

Improvisation and acting are the hallmarks of such performances. Adyghe dances are always emotional due to the dancer's noticeable readiness for action, his openness, but at the same time - inner peace and attentiveness.

Many Adyghe dances are based on mythological concepts: "Dyge" or the sun is a kind of code for the national dance. Thus, the shape of the sun contributed to the emergence of circular dances. But the biggest source of the content of the Adyghe dances is the Nart epic: “Once the brave sleds gathered on the black mountain and started a dance, competing in the dance with the sledges. Shabotnuko jumped on a three-legged round table and started dancing without spilling even a drop of seasoning and without disturbing the order ... ”.

The most characteristic features of Adyghe national dances

The first feature: the head, shoulders, torso, arms and legs of the dancer are synchronized in movements and take those positions that correspond to the specific elements of a particular dance. So there is a deep disclosure of the content of the dance.

Second: the head of the dancer is usually directed towards the partner. The girls in dance bow their heads to one of the shoulders and, if necessary, turn it in one direction or another, modestly lower your eyes. The young men always hold their heads high, they turn in the necessary direction more abruptly and impetuously.

Facial expression. Usually it is restrained smiles and a calm face in general in girls and more expressive in boys.

The shoulders of the dancers. Turning synchronously with the body, emphasizing the severity, restraint and pride. During turns, the corresponding shoulder first slowly begins to move in the desired direction. The girls lower their shoulders a little, and the young men hold them straight, and unroll them slightly.

The positions and movements of the dancers' arms and legs are varied and complex. A number of characteristic hand positions are more common in them, and especially in the dance movements of girls. But it is extremely difficult to describe such movements in words. Therefore, we will leave a specific topic to professional choreographers and visitors to the Adyghe folk dance studios.

There are many dances in Adygea that require skill and perfection. Such of them as lezginka, hasht, lo-kuazhe, kafa, uj are complex, stately and beautiful at the same time. But for any Adyghe dance is a demonstration of the strength of the spirit, when the impossible becomes possible. And this is art. A kind of gratitude for the mercies received from the ancient gods, this is a reflection of life in all its many-sided beauty, this is the way to cognition of the vast and meaningful world of human feelings. Deprived of its emotional content, dance ceases to be an art.

Photo in the top of the article from the site http://nazaccent.ru