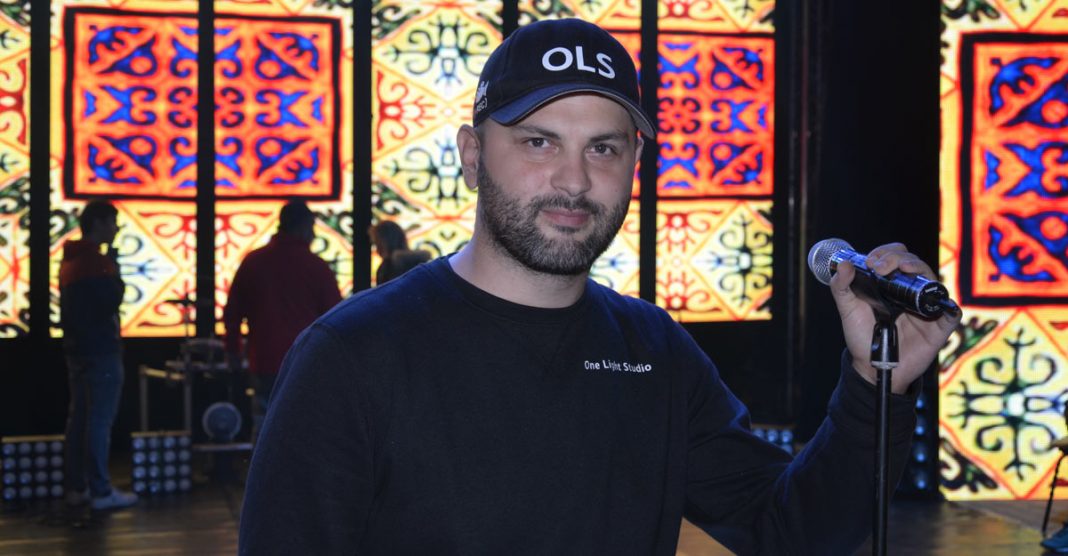 Since 2008, the company “One Light Studio” headed by Bisher Eroko has been engaged not only in filming clips, commercials and documentaries, but also in organizing concerts of leading performers of the South of Russia. The artists are firmly convinced that if Bisher deals with light and sound at a concert, then the quality, reliability and success of the event are guaranteed. Among the merits of Bischer are not only directorial and production activities, but also unique large projects, such as "First World" - a musical project to promote professional and novice artists.

On May 23 in the capital of the Karachay-Cherkess Republic, Cherkessk, our correspondent Vladislav Antonov met with Bisher Yeroko. Before the concert, Azamat Bishtov had only two hours left, Bisher set something up, gave commands to the stage personnel, corrected the position of the light screens, checked the sound and could not tear himself away from the console, but finally had mercy and gave us ten minutes of his time.

Knowing firsthand what role sound literally plays in a concert, how a well-defined light affects the viewer's perception of a songwriter, we asked Bisher to briefly talk about his work, impressions of the artists he works with, plans for the future.

“With every concert and video we shoot, we take another step towards making our venues and events more and more consistent with the requirements of world standards,” says Bisher. - Simultaneously with the constant improvement of the level of performing skills of the artists with whom we work, such as Azamat Bishtov, Angelica Nachesova, Aidamir Mugu, Aslan Tlebzu, Magamet Dzybov, the requirements of the audience to the quality of the technical support of their concerts, to the sound, lighting design of the stage are constantly growing. Improving this quality allows us to do more and more large-scale and memorable events that correspond to both the level of performers and the expectations of the public, which every year is becoming more sophisticated and demanding.

- So, for example, today (at the concert of Azamat Bishtov on May 23 in Cherkessk - author's note), - Bisher continues, - we use thirteen LED screens, literally moving the viewer to another reality, allowing Azamat to convey his creative idea to the audience as fully as possible to merge with the audience. Thanks to his outstanding vocal skills, good balanced sound and volumetric light, the viewer should get the impression that he is not in the Cherkessk Drama Theater, but in the huge Crocus City Hall in Moscow. The artist feels it - he sees the feedback from the audience, the viewer feels it - he gets pleasure. If everything happens this way, then we are working correctly.

Bisher says that any hall can be turned into a Stage with a capital letter, but he also has loved ones, from which he gets the greatest return and pleasure. These are the "Palace of Culture of Trade Unions" in Nalchik and the "Krasnodar Philharmonic".

- Nevertheless, he notes, - we give our best on any site 100%. First, because this is the motto of our work. And, secondly, because this is the motto by which the artists of "Zvuk-M" work. It feels like, - continues Bisher, that every concert our stars do as if it is the most important in their life. Give all the best. This also applies to Azamat Bishtov, Angelica Nacheva, Aslan Tlebzu, Aidamir Mugu and other performers. They literally charge me with their energy, exactingness to the smallest details. And I try to match their level, to do everything with maximum efficiency.

“Of course, it’s not without criticism and controversy,” Bisher smiles. “Artists are artists. But our main critic is the viewer. And he always remains satisfied.

There were still a lot of questions, but requests to Bicher to return to the hall and continue setting up the equipment became more and more insistent. Ahead was a two-hour concert and a full hall of people, in front of each of whom Bischer felt his personal responsibility for the sound, for the light, for making it perfect.

We wish him and by "One Light Studio" further success in their difficult, not always noticeable to the simple viewer, but such an important and painstaking work.

For the organization of concerts and performances, providing the technical part of the stage, sound and lighting design, you can contact Bisher Eroko directly by phone 8 (903) 426-03-72.

Aidamir Eldarov "Girl" - a novelty in the style of chanson