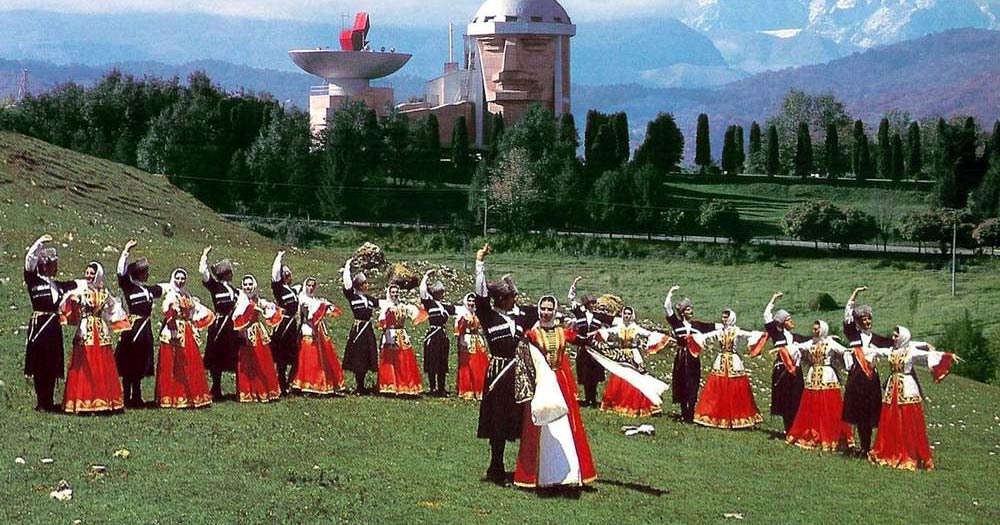 Kabardians and Balkars have a solid folk song heritage. The region’s song folklore consists of many areas: historical, heroic, ritual, lyrical, mourning, workers' songs, wedding songs, dance songs and many others. They are sung on all family and public holidays to the sounds of string orchestras, harmonies and other folk instruments.

Of the local features of the performance of songs, it can be noted that lyrical songs, for example, are sung by married women or girls in the family hearth circle, funeral songs are based on the dates of the death of a hero or the death of a loved one in a war, and
workers' songs - after harvesting or plowing, with stories about the land, seedlings, about caring for plants and harvesting.

Song folklore of Kabardino-Balkaria has a special poetic imagery. The poetical and musical construction of folk songs usually looks like this: an elderly man starts singing with a singing recitative, and the male choir echoes him with a unison sound - without words, but very musical and expressive.

The soloist usually accompanies singing with gestures and gestures, as if telling the audience about events in which he himself participated. The song continues with new musical intonations and the development of a verbal story. Further, such a singing recitative gradually goes into an almost speech part, retaining only its own metrhythm, and the unison chorus strictly leads its melodic line to the end of the song.

Kabardians and Balkarians are famous for their folk dances. In Kabardinians, the most common are: a smooth coupled dance, a lyric dance “Kafa”, a pair “Uj”, as well as a fast and temperamental “Islam”. Of the Balkar dances, the most famous are such as the pair dance “tuz-tepsuse”, a kind of round dance “tegerek-tepsuse” and the mass lyrical dance “abzeh”. Musical dimensions of dancing Kabardians and Balkars: 2 / 4, 4 / 4, 6 / 8. In music with 4 / 4 and 2 / 4 sizes, there are many triplets.

Initially, in the past, the Adyghe, Kabardians and Circassians constituted a single people. They also had a common oral folklore known as the Adyghe. The content of the works of the Adyghe oral folklore - legends about the heroes (the brave Aydemirkan and Hathyo Kochas), emotional lyric poems, many different fairy tales and stories, everything that makes up the common heritage of the three peoples.

The most important historical events in the life of the people, the national customs of the inhabitants of the region and their ideas about the ideal hero-hero were also captured in oral folk art. People who skillfully performed various works of oral folk art were very respected and popular among the people. They were called "dzheguako", which means "playing", or artist. The heroes of the Adyghe fairy tales always defeated their enemies - cruel, envious princes, terrible monsters. The heroes also fought with the giants - inyzhi. The hero always turns out to be stronger and wiser than these giants. People have always appreciated a joke and a sharp word. That is why the tales about the tricks of Khozhyo (among other peoples known as Khoja Nasreddin) have been and are still used with great love.

Photos in the top: http://komanda-k.ru