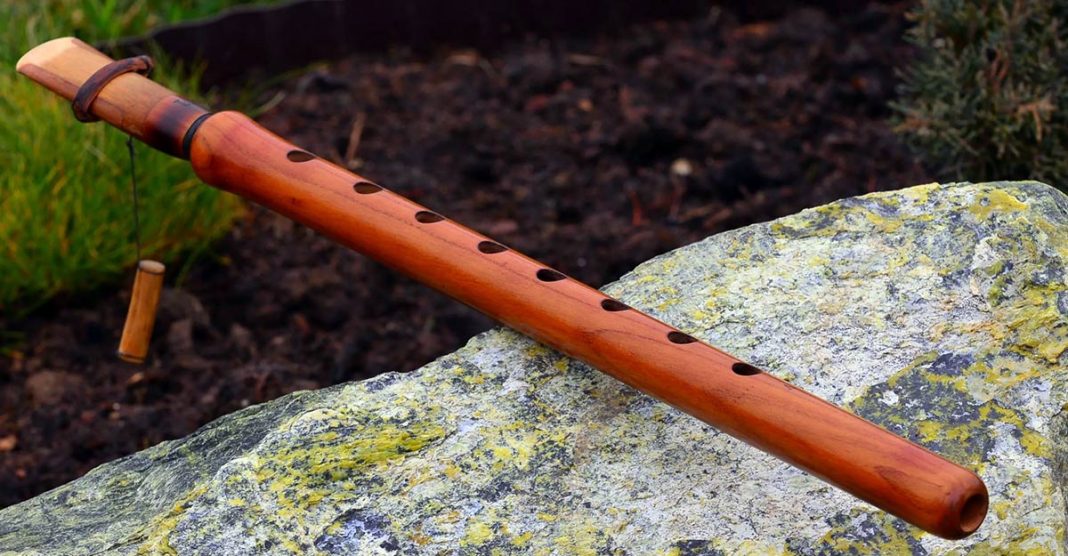 Duduk gave the world Armenia over 1500 years ago

Duduk is one of the oldest wind musical instruments in the world, which has survived to this day almost unchanged. Some researchers believe that the duduk was first mentioned in the written monuments of the state of Urartu, located on the territory of the Armenian Highlands (XIII-VI centuries BC)

Others attribute the appearance of the duduk to the time of the reign of the Armenian tsar Tigran II the Great (95-55 BC). In the writings of the Armenian historian of the 5th century AD Movses Khorenatsi speaks about the instrument "tsiranapokh" (a tube of apricot tree), which is one of the oldest written references to this tool. The duduk was depicted in many medieval Armenian manuscripts.

Due to the existence of fairly vast Armenian states (Great Armenia, Little Armenia, the Cilician kingdom, etc.) and thanks to the Armenians who lived not only within the Armenian Highlands, duduk is spreading in Persia, the Middle East, Asia Minor, the Balkans , Caucasus, in Crimea. The duduk also penetrated beyond its original distribution area due to the existing trade routes, some of which passed, including through Armenia.

Being borrowed in other countries and becoming an element of the culture of other nations, the duduk underwent some changes over the centuries. As a rule, this concerned the melody, the number of sound holes and the materials from which the instrument was made.

In various degrees, the musical instruments close to the duduk in design and sound are now available to many nations:

The unique sound of the duduk

The young wind was flying high in the mountains and saw a beautiful tree. The wind began to play with him, and wonderful sounds flew over the mountains. The prince of the winds was angry at that, and he raised a great storm. He defended his tree a young wind, but his strength quickly went away. He fell at the feet of the prince, asked not to destroy beauty. The governor agreed, but he punished: “If you leave the tree, waiting for its destruction”. Time passed, the young wind got bored and once rose into the sky. The tree perished, only a branch remained, in which a piece of wind got entangled.

The young man found a twig and cut a pipe from it. Only the voice of that pipe was sad. Since then in Armenia they have been playing the duduk and at weddings, and at funerals, and in war, and in peace.

Such is the legend about Duduk, the Armenian national musical instrument.

The Armenian duduk is an ancient folk musical wind instrument, which is a wooden tube that has eight playing holes on the front side of the instrument and two on the back. The components of the duduk are as follows: barrel, mouthpiece, regulator and cap.

It is created only from a certain kind of apricot tree, which grows only in Armenia. Only the climate of Armenia contributes to the growth of this apricot variety. It is no coincidence that apricot in Latin is “fructus armeniacus”, that is, “Armenian fruit”.

Great Armenian masters tried to use other types of wood. For example, in ancient times the duduk was made from plum, pear, apple, walnut and even bone. But only apricot gave a unique prayer-like velvety voice, characteristic of this unique wind instrument. Also made from apricot and other wind musical instruments - shvi and zurnu. Flowering apricot is considered a symbol of gentle first love, and its wood is a symbol of fortitude of the spirit, true and long love.

The duduk played the music on the duduk, where the lead duduk player plays the melody, and the second duduk is accompanied by the accompaniment, also called “dame”. When playing the lady on a duduk, the musician is required to have the following qualities: the technique of circular (continuous) breathing and to have a completely flat sound transmission.

“Dam” is a continuously sounding tonic note against which the main melody of the piece develops. The art of performing by a musician (damkash), a lady at first glance may seem not to carry any particular complexity. But, as professional duduk players say, playing just a few notes of a lady is much more difficult than a whole score of a solo duduk. The art of performing the lady on the duduk requires special skills - the correct staging during the game, and the special support of the performer, who continuously blows air through himself.
The even sound of the notes is provided by a special technique of playing a musician who keeps the air inhaled through the nose, in the cheeks, providing a continuous stream to the tongue. This is also called the technique of permanent breathing (or it is called circulating breathing).

It is believed that the duduk, like no other instrument, is capable of expressing the soul of the Armenian people. The famous composer Aram Khachaturian once said that the duduk is the only instrument that makes him cry.

Depending on the length, there are several types of tools:

The most common of the modern, duduk building La, from 35 cm in length. It has a universal system, suitable for most tunes.

Instrument Up to, long just 31, see, due to which it has a higher and more delicate sound and is more suitable for duets and lyrical compositions.
The shortest duduk, building Mi, is used in folk dance music and its length is 28 cm.

Like any "live" musical instrument, the duduk requires constant care. Caring for the duduk consists in rubbing its main part with walnut oil. In addition to the fact that the wood of the apricot tree has a high density (772 kg / m3) and high wear resistance, walnut oil gives the duduk surface even greater strength, which protects it from the aggressive effects of climate and environment - humidity, heat, low temperatures. In addition, walnut oil gives the instrument a unique aesthetically pleasing appearance.

The tool must be stored in a dry, not humid place, while it is undesirable to keep it in a closed and poorly ventilated place for a long time, contact with air is necessary. The same applies to reeds. If the canes of the duduk are stored in some small airtight case or box, then it is advisable to make several small holes on this case so that air can enter there.

If the instrument is not used for several hours, the plates of the cane (mouthpiece) “stick together”; This is expressed in the absence of the necessary gap between them. In this case, the mouthpiece is filled with warm water, thoroughly shaken, closing its back opening with a finger, then pour out the water and hold it for a while in an upright position. Approximately in 10-15 minutes, due to the presence of moisture inside the mouth, the gap at the mouthpiece opens.

Once you start playing, you can adjust the pitch of the instrument (within a semitone) by moving the knob (clamp) in the middle of the mouthpiece; the main thing is not to overtighten it, because the tighter the regulator is pulled, the narrower the mouth of the reed becomes and, as a result, the more squeezed timbre not saturated with overtones.

The modern heritage of the duduk

What unites Martin Scorzese, Ridley Scott, Hans Zimer, Peter Gabriel and Brian May from the legendary group Queen? A person familiar with cinema and interested in music can easily draw a parallel between them, because they all at one time or another collaborated with a unique musician who made the soul of the Armenian people more than anyone else on the world stage for recognition and popularization. This, of course, is about Jivan Gasparyan.
Jivan Gasparyan is an Armenian musician, a living legend of world music, a person who introduced the world to Armenian folklore and duduk music.

He was born in a small village near Yerevan in 1928. He picked up his first duduk at the age of 6. He took the first steps in music completely independently - he learned to play the duduk given to him, simply listening to the playing of the old masters, without having any musical education and base.

At twenty, he performed on the professional stage for the first time. Over the years, his musical career has repeatedly received international awards, including from UNESCO, but he gains world-wide fame only in 1988.

And Brian Eno contributed to this - one of the most talented and innovative musicians of his time, rightfully considered the father of electronic music. During his visit to Moscow, he accidentally heard the play of Jivan Gasparyan and invited him to London.

From this moment a new international stage begins in his musical career, which brought him world fame and introduced the world to Armenian folk music. Jivan's name is becoming known to a wider audience through the soundtrack, on which he worked together with Peter Gabriel for the Martin Scorcese film The Last Temptation of Christ.

Jivan Gasparyan begins touring all over the world - he performs together with the Kronos Quartet, Vienna, Yerevan and Los Angeles Symphony Orchestras, tours Europe and Asia. Performs in New York and gives a concert in Los Angeles with the local Philharmonic Orchestra.

Here is what Hans Zimmer says about working with him: “I have always wanted to write music for Jivan Gasparyan. I think he is one of the most amazing musicians in the world. It creates a one-of-a-kind unique sound that immediately sinks into memory. "

Returning to his homeland, the musician becomes a professor at the Yerevan Conservatory. Without leaving his touring activity, he begins to teach and releases many famous duduk performers. Among them is his grandson Jivan Gasparyan Jr.

Today we can hear the duduk in a variety of movies: from historical paintings to modern Hollywood blockbusters. Jivan's music can be heard in more than 30 films. Over the past twenty years in the world released a record amount of music recordings duduk. The game on this instrument is learned not only in Armenia, but also in Russia, France, Britain, the USA and many other countries. In the 2005 year, by modern society, the sound of the Armenian duduk has been recognized as a masterpiece of UNESCO World Intangible Heritage.

Even in the modern world, through the centuries the soul of an apricot tree continues to sound.

“Duduk is my shrine. If I hadn't played this instrument, I don't know what I would have become. In the 1940s I lost my mother, in 1941 my father went to the front. There were three of us, we grew up alone. Probably, God decided that I should play the duduk, so that he would save me from all life trials, ”says the artist.

Photo in the top provided by https://www.armmuseum.ru