Culture and SocietyNational dances of the CaucasusNews

National dances of the Caucasus 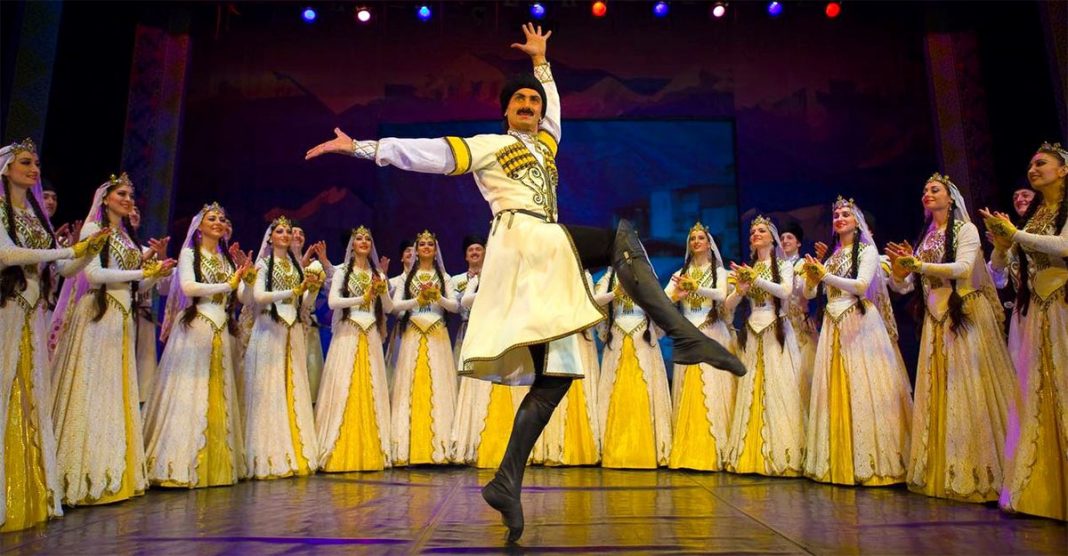 Murad Magomedov: “You are my sweet happiness!”

People danced and dance always and in all countries. The love of expressing yourself in dance was always natural and had a national identity. Dance harmonizes a person and increases the effectiveness of his thinking.

Dances of the peoples of the North Caucasus

The names "North Caucasian" dances and "mountain" dances are a generalized concept of folk dances of the region, which are universally perceived as fast, fiery (mostly male) dances, with a demonstration of courage, masculinity and dexterity.

The peoples of the North Caucasus are strongly interconnected by cultural relations, but often also genetically. Historically, they have a commonality, because over the centuries, the interpenetration of cultures, life and life-culture of the tribes has occurred. These processes have always been reflected in folklore, including in dance culture. In choreography, the processes of interaction took place more intensively than in other genres of folk art, since the language of dance is international and there is no language barrier in it.

A mobile circular dance is popular among many peoples of the North Caucasus, but everyone calls it differently. If the Karachais call it "Stemy", then the Dagestanis call it "Lezginka", and the Balkars call it "Tegerek Tepseu". Absolutely the same dance choreography among Kabardians and Circassians is called "Islamey", among the Adyghe people - "Islamiy", Abkhazians like "Apsua", Chechens and Ingush also like "Lezginka", Ossetians "Zilga Kaft", sometimes "Tymbyl Kaft".

Many variations of the common dance have similar features, such as raising toes, throwing out their hands, and the dancers - similar clothes, props and decorations, the musical accompaniment and the melody of the dance are common. The slow lyrical dances of the peoples of the North Caucasus also bear historical similarities. The dances of the Karachais, Kabardians and Circassians are similar to each other: "Tyuz tepseu", "Syuzulup" and "Kafa", respectively, the Adyghe "Zafak" and the Ossetian "Honga Kaft". His girl and boy dance at a distance, without touching each other.

It is easy to get confused in the number of names of another common dance, which has nine names among Balkars and Karachais: "Khychauman", "Zhortul", "Nikola", "Abezekh", "Abzek", "Marako", "Kysyr", "Zhiya" and "Dzhezok'a". Its general name is "Under the Hand". To nine we add four more names: “Uj pu” and “Uj hasht” (“Under the arm” of the Kabardians and Circassians), “Uj-khuray” (the dance of the Adyghe people) and “Simd” (as it is called among the Ossetians).

Since the Balkars, Karachais and Ossetians had close contacts and mutual influence for a long time, choreographic co-creation followed the path of creative assimilation and creative processing, and not the path of mechanical borrowing.

Today the national choreographic tradition of the North Caucasus is widely known and respected all over the world. Since the nineteenth century, interest in the national dances of the highlanders has not waned, and in the twentieth century it was even significantly strengthened by Soviet cinema, television and major international musical events. We know not only the restaurant "Lezginka", but also "Naurskaya", "Bazar", "Dance of Shamil" and "Polka oira". In addition, the national choreographic art of the North Caucasus, namely the national dance schools, today, with the help of the language of dance, form the tolerance of people of different countries to each other, increase their interest in studying the culture of the region.

Shamil Kasheshov "broke the shackles" in...

Murad Magomedov: “You are sweet happiness...