Reconstruction of one day of the Great Patriotic War in Nalchik 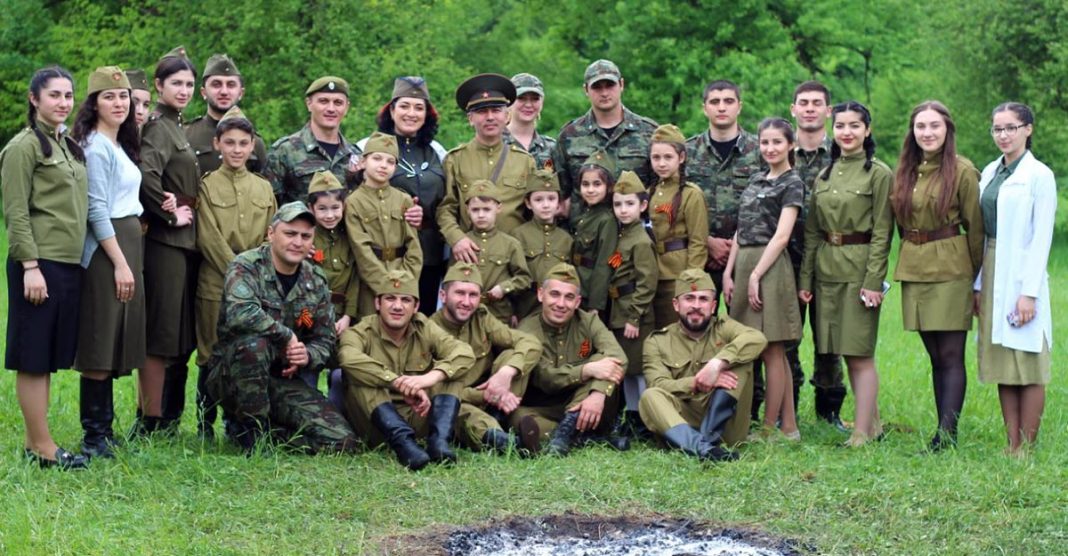 On the eve of Victory Day in Nalchik, there was a reconstruction of one day of the Great Patriotic War

From 6 to 7 in May 2018, the cultural and patriotic production of “On the approaches to the Great Victory” was held in the Recreation Park of Nalchik. The initiator and organizer of the event was Amir Kulov, artistic director of the AmikS song theater, together with his team.

Student organizations of the Kabardino-Balkarian State University, such as the Kallisto Dance Theater, the KBSU Choir, as well as famous performers Irina Rakitina, Lyubov Sherkhova, Khusein Shalov and others also took part in the production.

This event is being held for the fifth time and already the third year - in the largest park in the North Caucasus “Atazhukinsky Garden”. According to Amir Kulov, the very idea of ​​the reconstruction came to him due to the fact that the repertoire of the AmikS collective has a large number of military-patriotic compositions.

“We somehow decided to install musical equipment on one of the sites and perform military songs the whole day. And gradually this musical improvisation reached the level of cultural and patriotic staging, as the number of participants in our concert increased each time. It is very pleasing that, long before its start, the participants notify me, asking me to start preparations. They treat him with all their heart and carefully prepare, ”Amir Kulov explained.

- “The event was organized with the aim of honoring the memory of those killed in the Great Patriotic War and the patriotic education of young people, says Amir. - For a day we tried to create a military situation and bring it closer to the conditions of those years. Of course, we didn’t manage to recreate everything, but this is enough to make the guys and our younger generation feel what our grandfathers, great-grandfathers had gone through, what they sacrificed, so that we could live in such a beautiful place today.

- Before the start of the event, we talked with children - members of the AmikS team about the war, and began to ask them about what they know about this time. And the children’s answers shocked me. They at their young age already know a lot about that time. Therefore, I think that the goal has already been achieved to some extent, ”Amir continued. - Every year we update our repertoire. This year we can boast, because we have included a completely new composition - “On Women of the Kabardino-Balkarian Republic during the War”. We decided to give women special attention and make such a separate composition. ”

Amir also noted that thanks to social networks, it became possible to notify a large number of people about holding this event, and many expressed a desire to take part in it.

In the evening of the first day of the production, the construction was organized, then songs to the guitar and accordion around the fire, watching a movie and hanging up. And in the morning - at 4 o’clock - the alarm rises, as it was then, on June 22, 1941, when the fascists treacherously attacked our country ... “These are indescribable emotions. This is cold and horror, shock and anxiety, a siren and ... the beginning, the beginning of the war, ”Amir shared his impressions. Then a minute of silence, and a touching action - the guys cut out the two-meter letters of the word “Victory” from a tree, decorated them with lighted candles, and solemnly launched into the lake. The most honored guests were our war veterans who arrived at the event at noon.

At lunchtime, a field kitchen was organized, in which everyone, without exception, ate only front-line food.

“I am often asked if I oblige people to participate here? To which I always answer that this event is a voluntary commemorative action. And everyone takes part in it of their own free will. I myself know the pain of losing a loved one in a war. Four people from my relatives went to war and did not return from there alive. And therefore, I want the inhabitants of our republic to pass on a true story about that wartime from generation to generation, ”said Amir Kulov.

The military personnel of the city of Nalchik also helped. They staged demonstrations, held an exhibition of military equipment.

In addition, a military sports game was held in the afternoon, which brought together the arrived delegations from the Stavropol Territory, the KCR, Chechnya, and Ingushetia. And delegations from the Crimea and Dagestan held the "Meeting of Young Patriots" and organized a joint concert with the AmikS Theater.