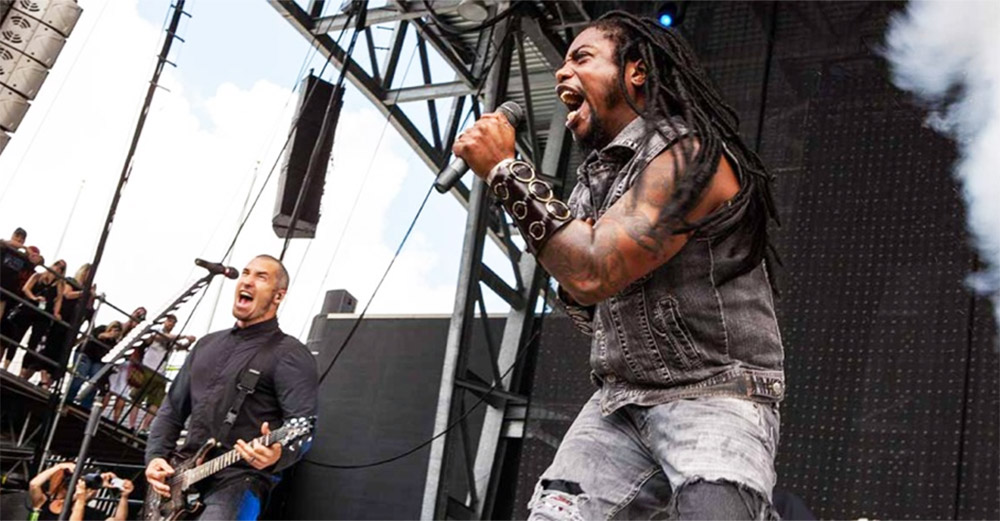 We present to fans of experiments on the merger of heavy metal with alternative rock the work of a team called Sevendust.

Later we will move on to the biography of the collective, but for now - some of the group’s most interesting tracks.

The story of Sevendust dates back to 1992, when bass guitarist Vince Horseby and Morgan Rose, who played drums, left the band Snake Nation and decided to create their own project. At first the group was called “Crawlspace”. Later they were joined by Lyon Witherspoon (vocalist), guitarist Lee Banks and another guitarist, John Connolly. Banks, however, almost immediately left the group, and Clint Lowry took his place. In the summer of 1996, the band signed a contract with TVT Records.

In 1997, the band released their first album of the same name. Literally all tracks on the plate are oversaturated with profanity, and therefore Yandex.Music marks them with the symbol “E”. All the songs in the collection are ideal for crossfit or classes in the room with iron. Listen to:

The band's second album, entitled “Home”, was released in 1999 and immediately fell to 19th position on the Billboard 200. Chino Moreno (Deftones) and Skunk Anansie contributed to this album. In the same year, Sevendust appeared at the 1999 Woodstock Festival, where bands such as Korn, Nonpoint, Reveille, Megadeth, Godsmack, Mudvayne, Powerman 5000, Machine Head, Limp Bizkit, Disturbed and Metallica performed in addition to them.

By the end of 2001, a third longplay, “Animosity,” appeared on store shelves, subsequently falling into 28th position on the Billboard. Aaron Lewis from Staind contributed to the album. Two songs from this album, Angel's Son and Live Again, were shot, and singles Praise and Angel's Son took 15 and 11 positions on the Modern Rock Chart.

In our opinion, the albums “Home” and “Animosity” are not very successful, attention is probably drawn only to a track called “Praise”: when you listen to it, you involuntarily recall the soundtracks from the best versions of shooters from the beginning of the XNUMXs. It is better not to try to translate the songs of these two albums into Russian, so as not to experience a cultural shock.

In the fall of 2003, together with tvt label the fourth album, “Seasons”, which today is considered one of the most commercially successful albums by Sevendust, was released: it debuted on the Billboard charts immediately at 14th position, and about 70 thousand copies of this album were sold out in the first week of sales. Like the previous work of the team, it is replete with calls for unnatural forms of sexual life with opponents, the words “shit”, “ass” and their derivatives from list “B”.

The fifth album, “Next”, was released in October 2005 and became one of the high-profile events of the alternative music scene in the fall of 2005 ... In the USA, this energetic album debuted at 20th position, about 37 thousand copies were sold in the first week album. One of the album’s tracks, the song “Pieces”, hit the soundtrack for the film Saw 2 (which is not surprising). Let's listen to this funny song, and then the reality will seem much better than before.

Sevendust's sixth album, entitled "Alpha", was released on March 6, 2007. The album debuted at number 14 in the US (today it’s the Sevendust record), and in the first week more than 42.000 copies of the album were sold. In the same year, the group, together with Diecast, went on the longest tour in the history of Sevendust (10 weeks). The album’s attention is drawn to the technically sound track “Driven”.

Later the collection Retrospective 2 was released, which included songs that were not included in the albums, some recordings from concerts, as well as the bonus track The Rim from the album Alpha.

The seventh studio album, “Chapter VII: Hope & Sorrow”, was released in April 2008 and debuted at number 19 on the Billboard. Of course, the song “The Past”, performed in a completely non-typical style for the group, stands apart from the whole album.

The band’s eighth studio album, dubbed “Cold Day Memory,” was released in spring 2010. Our interest in this album was aroused by the almost romantic track “Last Breath” with the keynote that “nothing changes in this broken world when I pray for it”. Let's listen:

The ninth studio album “Black Out The Sun” was released March 26, 2013. At the same time, a video clip for the single “Decay” was uploaded to the network. The album “Time Travelers & Bonfires” of twelve tracks was released in 2014. It is distinguished from previous works by Sevendust envying melodicity and a much lower degree of aggressiveness. Actually, she comes out with the note “nu metal”.

The penultimate (today) album called “Kill The Flaw” was released in 2015, and only three years later - in May 2018, the team delighted fans with the fresh collection “All I See Is War”. With a few songs from it, we pleased you at the very beginning of this article.

At the end of the material, we cannot but offer to watch the latest Sevendust video on the official channel of the “Riserecords” label called “Medicated”.