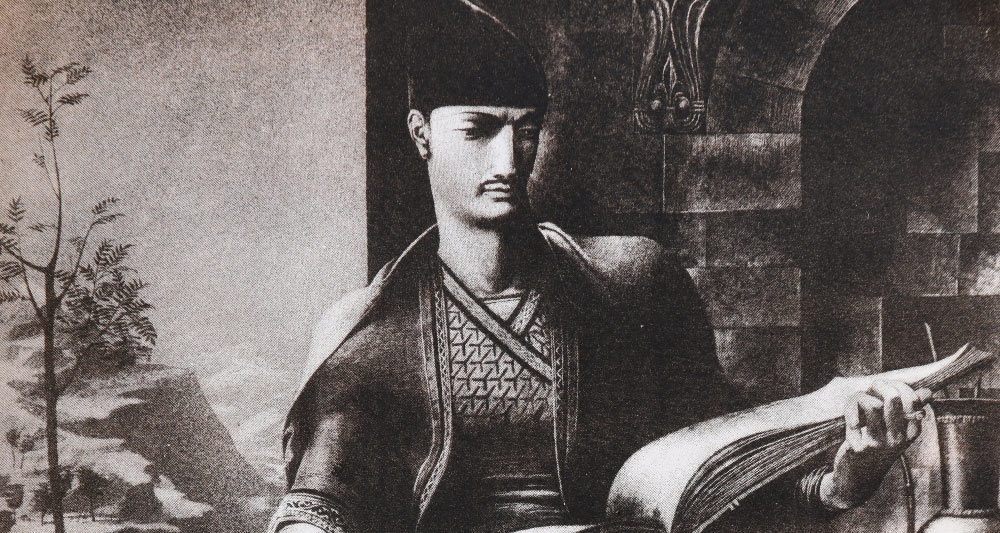 Biography of the great poet

The most famous Georgian poet of the twelfth century and the author of the world-famous poem "The Knight in the Panther's Skin" was born in the sixties (according to other sources - in the seventies) of the 12th century. The place of his birth is also not specified by historians, but presumably it was the Georgian village of Rustavi.

He studied Shota Rustaveli in Greece, worked as the state treasurer of Queen Tamara, and then as an artist and restorer of the Georgian monastery of the Holy Cross in Jerusalem. It is known from rare surviving facts that the poet was hopelessly in love with the queen, lived for a short time and died in the monastery where he worked. Unfortunately, no other biographical information about Shota Rustaveli has survived. But his imperishable poetic creation called "The Knight in the Panther's Skin" became widely known and popular all over the world.

"Knight in tiger skin". Hymn to freedom and love

Since the eighteenth century, and only in the Georgian language, there are more than fifty editions of the poem. Many translations have been made into foreign languages, among them five - in Russian. The plot of the poem is borrowed from an ancient manuscript, about which the poet himself said: "I found a Persian story and put it in verses, like a large pearl passing from hand to hand."

The poem “The Knight in the Panther's Skin” consists of two story cycles: Indian Tariel and Nestan-Darejan, and Arab Avtandil and Tinatin. Rustaveli managed to give a rather deep psychological description of the heroes, to depict their inner essence, which became an innovation for the poetry of the twelfth century. Heroes of Rustaveli - with lively bright characters, fearlessly and selflessly fighting for justice and happiness. Their images are typical and generalized for people living in the twelfth century. Nestan-Darejan is the main heroine of the poem, who steadfastly and patiently endures the hardships of imprisonment after rejecting a forced marriage. Three knights are fighting for her release - brothers-in-arms, and this struggle leads all the heroes to a happy ending.

The poem is permeated with the idea of ​​the triumph of justice over tyranny, arbitrariness and evil, and only the strength of the spirit and faith in good can bring happiness to the earth.

In general, "The Knight in the Panther's Skin" is an enthusiastic hymn to freedom and real sublime earthly love. Another ideological line of the poem is patriotism, as a condemnation of feudal strife and separatist aspirations of the nobility, and vice versa, the value of a reasonable life, worthy of a noble person. The heroes of the poem are not afraid of death. False knights, faint-hearted would-be warriors, vile cowards and traitors, flatterers and hypocrites are branded shame in the poem.

The plot of the poem "The Knight in the Panther's Skin" has some plot similarities with Western European novels about knights and with eastern epic poems of the Middle Ages, but on the whole it is an absolutely independent author's work of Rustaveli. As a humanist, the poet extols freedom of the individual, freedom of thought and feeling, talks a lot about the value of human life, created not by fate, but by people themselves.

The significant value of Rustaveli's work is that he raised Georgian poetry as a whole to a great height, and also became the ancestor of the new Georgian literary language, thanks to the elegant poetic word and style of the poem.
"The Knight in the Panther's Skin" is an unsurpassed example of ancient Georgian poetry, which has entered world literature and has become on a par with the world's greatest epics.