Home Announcements The show “Three ways - one dream!” With the participation of Azamat Tsavkilov will be held in ... 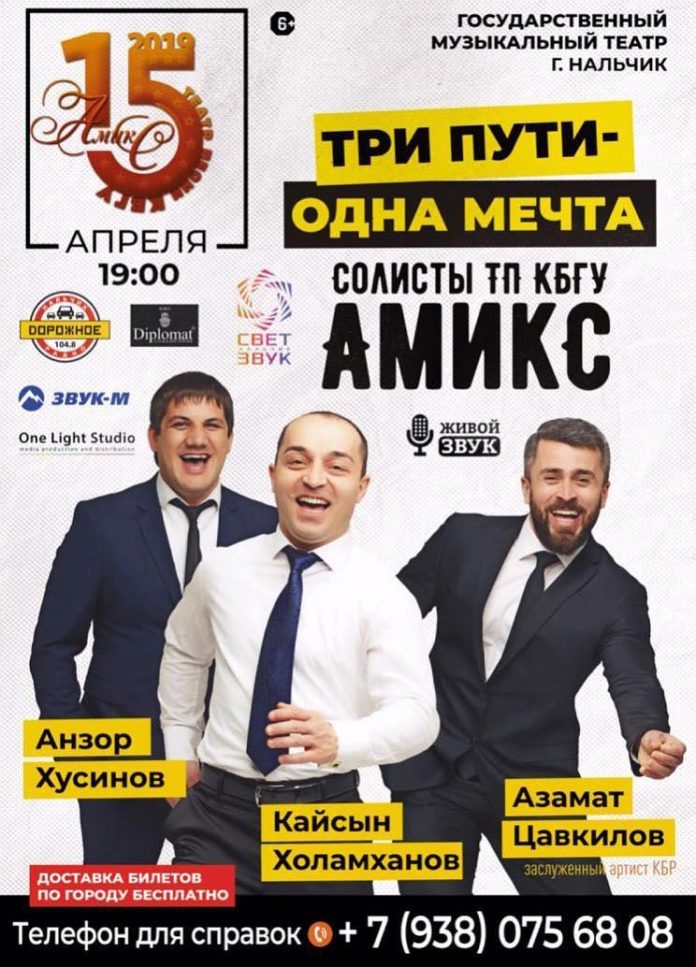 Theater of Songs of KBSU "AmikS", one of the soloists of which is the artist of the music publishing house "Zvuk-M" Azamat Tsavkilov, celebrates this year's 15 anniversary.

In honor of this event, according to the head of the theater Amir Kulov, it was decided to hold 15 of various events, of which 12 will take place on the date of each month 15. As part of this idea, 15 in April at the State Musical Theater of Nalchik will host a theatrical show called “Three Ways - One Dream!”, With the participation of Anzor Husinov, Azamat Tsavkilov and Kaisyn Kholamkhanov.

“The concert“ Three Ways - One Dream ”is already the fifth event since the beginning of the anniversary year, - says the head of the theater Amir Kulov, - the show will include performances by our three most famous soloists. The scene once connected three destinies, united by a common cause - love for creativity and striving for perfection. The most famous compositions will be performed in the three state languages ​​of Kabardino-Balkaria, and the three artists (representatives of different nationalities) have been the face of AmikSa for many years.

The Theater of Songs of the KBSU “Amiks” was created in 2004 year. Its founder and permanent leader to this day is the Honored Worker of Culture of the KBR Amir Mamilovich Kulov. The name of the Theater stands for: The World and the Student Team.

The composition of "AmikSa" consists of young artists (mainly students) and children. The number of people permanently working in the troupe is about 60 people.

“Today, perhaps, the name can be changed, since many of the members are no longer students and have a higher musical education. For example, in the "AMirIK team of Solistov", - says the head, - The repertoire of the collective includes songs recorded in a variety of genres and styles. Starting with folk, ending with jazz compositions. There are five large programs, united by a common name - "Little Big Love Stories". Here are collected songs about love in all its manifestations. There are three retro programs and word programs by individual authors. The annual action "On the Approaches to the Great Victory" is also held - this is a musical and historical reconstruction of one of the days that brought the Great Victory closer: we are 1405 hours in conditions close to those years, we sound the events of this particular day (XNUMX day) and, of course, by the fire and in the concert version songs of those years sound.

We also hold an annual festival of art song dedicated to the works of V.S. Vysotsky in the Elbrus region, the solo programs of our soloists and AmikSikov, and the crown of our activity is the First Adygsky musical “The Sun of the Narts”. This year there will be a premiere of this musical translated into Russian.

AmikS has a huge number of awards. Our soloists are regular participants in various contests, festivals, performances in Germany, Turkey and China.

Now we have plans to realize everything planned and in parallel to organize a tour with the musical “The Sun of Narts” in the cities of Great Russia and the near abroad! ”

Azamat Tsavkilov came to the Theater of Song while still a student. As Amir Kulov says, it was easy to recognize the makings of a future star in Tsavkilov ...

“This is a phenomenon that is another good example of how a person creates his own destiny. Another bold example of how to implement a dream. Azamat, in a relatively short time, has grown from a simple rural lad to an honored artist!

At the initial stage, he joined the choreographic group. Having seen the makings of him in the vocal field, I began to include it in the vocal. Then he offered to perform solo. The first song "Sataney" (girl's name) brought him success and fame. They began to recognize him on the streets, calling out: “She! Sataney! ” His parents didn’t particularly like these vocals. They believed (actually, like many of us), that this is not a masculine and frivolous matter. But Azamat did not give up and stubbornly walked towards his goal. He was constantly searching, developing, recording songs, shooting videos. Then, having graduated from the aforementioned faculty, successfully, having turned around in the show business, understood the need for vocal lessons professionally, entered the Rostov Conservatory and is already a certified vocalist.

“For me, the second father is Amir Kulov, and the second mother is Lana Kulova, Amir's wife. These people are in everything an example to follow. As for the team, we have a very large line-up, and it changes every day. So, the trinity: Anzor, Kaysyn, I - we are "veterans" of our theater. These people are my close friends. The first song we recorded together was called "Festive" and sounded in three languages. This is a composition about the friendship of our peoples.

On April 15, we invite everyone to the show with theatrical elements. Number 3 will be used everywhere: 3 blocks of 3 songs, the sound of songs in a trio. This program is a glorification of peace (in the light of recent events), friendship and harmony in our republic and throughout the world. There will be many compositions dedicated to the native land, brotherhood and friendship of peoples. We try to make a small performance out of each song. This is the difference between the performances of our group and the numbers of other artists, ”says Azamat.

Well, the main big anniversary concert of the Song Theater of the KBSU “Amiks” will take place on December 15 in Nalchik. Paul, according to Amir Kulov, the program will include the best concert numbers of the band! 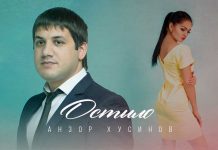 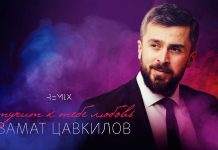 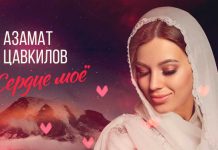 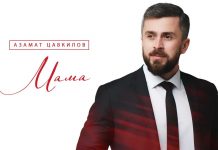 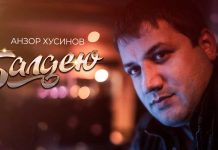 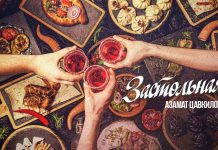 Songs of artists "Zvuk-M" in the 5th OK chart!