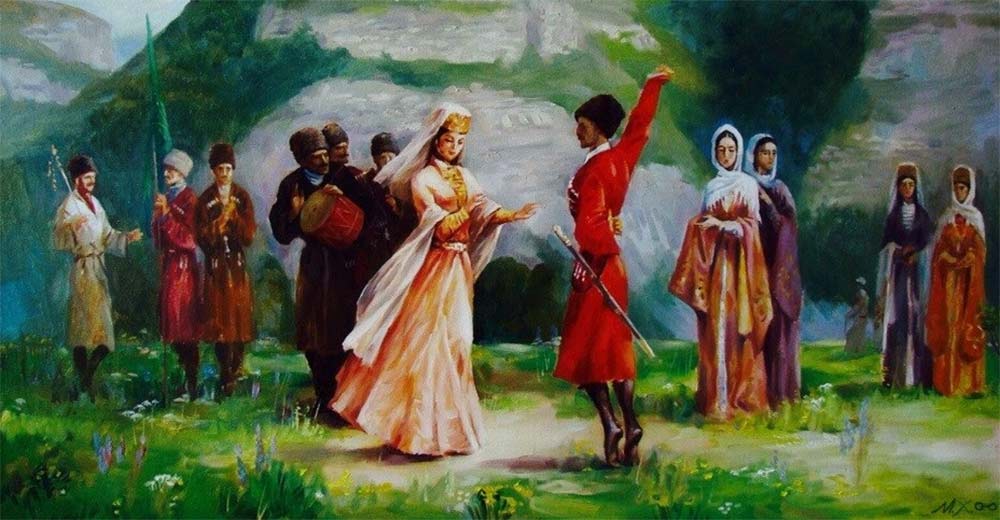 Only a part of information about musical aspects of the history of Adygea’s culture has survived. There is no doubt that this is deservedly the most important role of Adyghe musicians in the public life of the mountain ethnic group.

From a historical and modern point of view, the Adyghe musical culture is a system that combines long-established and new forms of existence. The most famous examples of Adyghe music of the XIX - XXI centuries, presented in the form of amateur forms, musical folklore, as well as pop and academic art.

The system of musical culture of the Circassians has a pronounced lively, dynamic form and includes many elements. Structurally, this system was formed about two centuries ago and repeats the structure of the developed types of other national cultures of the North Caucasus. By the end of the 20th century, there was a division of the general movement of the Adyghe music into traditional, pop and academic forms, and each of them now has its own audience and its famous musicians.

The main figure of the Adyghe musical creativity is the medieval dzheguako (artists who performed at public and family celebrations). Both at home and outside the region, the names of many performers and composers of Adygea became known: Kim Tletseruk, Mahomet Hagauj, Kaplan Tuko, Aslan Nekhai and others.

It is worth noting the historical period of the formation of the Soviet government, when the amateur art activity appeared, and as a special form of the development of musical culture, it became the basis of a completely new musical direction for the Circassians, which was closely associated with pop and academic musical professionalism. The traditional musical culture of the Circassians remained the most large-scale and popular area of ​​culture in our days. Moreover, at the end of the 20th century in Adygea, there was a revival of the juguaco institute, but in new actual forms and in the growth of the number of young harmonists and folk instrumental ensembles playing at festivals and other cultural events.

The new century was marked by attempts to revive the culture of traditional singing and the development of such national musical instruments as Kamyl and shychepshine.

The development of musical folklore is the basis for the formation of national art in general. Therefore, the work on recording works in ethnographic expeditions never stops in the republic, which are then recorded by professional musicians and performers, and subsequently used by amateur artists. Both the vocal and dance culture of Adygea today are a single whole, including musical folklore, amateur performances, pop genres and academic creativity. The cultural space, in which new types of musical culture of Adygea are formed, consists of clubs, Houses of Culture, concert venues, as well as institutions of professional education.

The system of musical culture of Adygea has retained the national flavor and the ability to be perceived by the audience of other cultures, it has been steadily strengthening its position over the years in the life of the ethnic group. All this made it possible for Adygea to become on a par with other subjects of the Russian Federation and to feel confident in the general processes taking place in the country, and even more broadly in European musical culture.

A vivid example of a new stage in the development of the musical culture of Adygea can serve as the theatrical show "FREEDOM" organized and conducted by the companies "ETHNIKA" and "TLEBZU-RECORDS" in the framework of the international festival of folk art "Adyg folklore". The recent release of the self-titled album of the famous Adygeyan artist Aslan Tlebzu - the author of "FREEDOM", was also a significant event. We invite readers to listen to this album right now:

Photo in the top of the article from the site http://adygi.ru