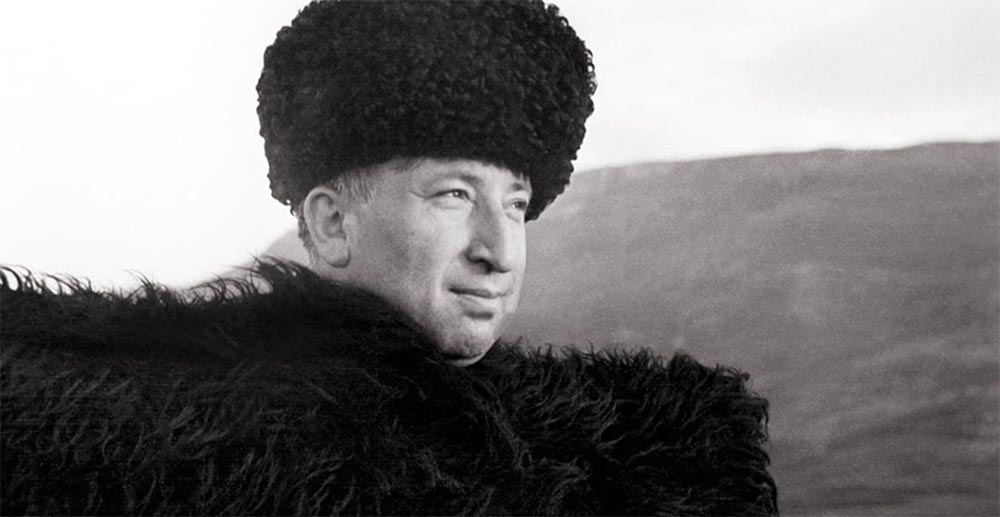 The great poet of Dagestan, beloved by the people

His books were published in millions of copies, and speeches have always been sold out. Particularly popular were the songs to the poems of Rasul Gamzatov, albeit translated into Russian (the poet wrote in his native Avar language), but always heartfelt and highly artistic. It is known, for example, that Leonid Ilyich Brezhnev, listening to the song "Cranes" could not hold back tears.

Rasul Gamzatov was born on September 8 1923, in the small Dagestan village of Tsada. His father was a famous Dagestan poet, and Rasul from a young age was instilled a love of poetry. Studied Rasul Gamzatov in the pedagogical school, then in the literary institute named after M. Gorky, after which he worked in the Union of Writers of Dagestan almost all his life.

The first collection of poems of the poet, devoted to the Great Patriotic War, was released in 1943 year, while still studying at a pedagogical school. With his works, Rasul glorified Dagestan, his homeland and made Avar language known throughout the world.

The people around him have always noted in him seething energy, sparkling humor and sharpness of mind. He always judged soberly, in any situation and in relation to any person, he could publicly pronounce what others were afraid of. “My mission is to write and help people every day” - this is how the poet saw himself. Early recognition and fame did not hinder him, but motivated him to create better and more.

Rasul Gamzatov was open, it was easy to communicate with him, he respected the interlocutor and very much appreciated talented people.

The song "Cranes" - a hymn to the dead horsemen

The song “Cranes” became a kind of common hymn to soldiers who died during the Great Patriotic War. Poems to the song Rasul Gamzatov wrote standing at the monument to Sadak Sasako, who died from the consequences of the nuclear explosion in Hiroshima. Suffering from radiation sickness, Sadaki believed she would recover if she made a thousand cranes. But she managed to collect exactly half. The girls' friends raised funds for a monument, which became an anti-war symbol for the residents of Hiroshima. Standing at the monument, Rasul Gamzatov watched the assembled people, who had paper cranes in their hands. At some moment a flock of cranes flew in the sky.
Initially, in the text of the song, instead of the word “soldiers”, there was the word “dzhigits”: “It seems to me, sometimes, that dzhigits, who did not come from the bloody fields, were not buried in our graves, but turned into white cranes”. Mark Bernes persuaded the poet to shorten and change the text. “At first I resisted, but Bernes was able to persuade me that removing bad lines from a poem could be a bad poet. But to remove the good ones is only up to a good poet ”- this is how the author later told about this situation.

The translation of the song "Cranes" was made by Naum Grebnev, whom Rasul Gamzatov even called his co-author. “It (the poem“ Cranes ”) seemed closer to him than all other poems, for he himself is a wounded warrior who lost his relatives and friends in the war. It became his own pain for him, ”wrote Rasul Gamzatov.

The great Dagestan poet lived by creativity and therefore everything that came out of his pen was easily and closely perceived by the reader. “Poetry is excitement. The poet must catch him like a bird in flight. If there is excitement in people, then the heart misses the heart ”- this is how Rasul Gamzatov wrote about his life's work.

The poet did not like everything unnatural and superficial. “I am a great pessimist and I respect pessimists. I am glad that I am a pessimist and therefore did not kill anyone. And today's youth kills with great optimism. We have suffered a lot from the optimists. These telephone kisses and meeting love ... "

Gamzatov Rasul 3 November 2003 of the year is gone. A lot of documentary films were shot about the poet, streets, airplanes, an asteroid, awards, libraries and educational institutions were named in his honor. Every year in the homeland of Rasul Gamzatov a large literary festival “White Cranes” is held, dedicated to his work. Today, the poems of the great poet sound like a farewell to all living on Earth.

Live long, live righteously,
Seeking the whole world to be a fellowship,
And neither of the nations blaspheme,
Keeping his own honor at the zenith.

Photo in the top from the site https://ndelo.ru