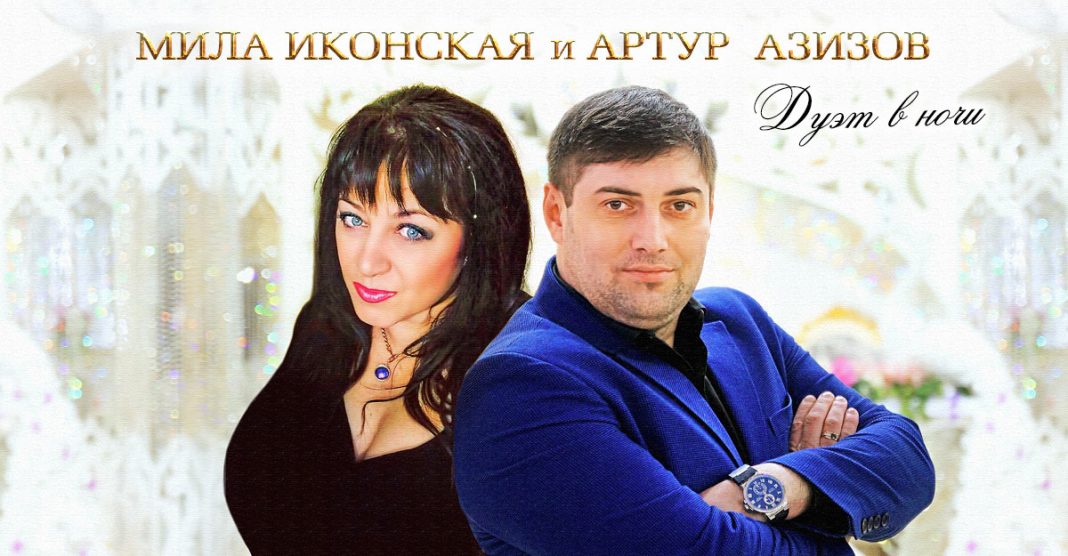 A long-awaited novelty appeared on the windows of digital stores - Mila Ikonskaya and Artur Azizov's song Duet in the Night.

Her official release was awaited by fans of the singer in many cities. It all started with the fact that Mila once heard in the performance of Arthur her own track ...

“Then I arrived in the city of Mineralnye Vody and went to one of my favorite restaurants. There was live music playing and I heard the words of my song “Station for Two”, which was performed by a guy with a very pleasant voice. That was Arthur. When he was told that Mila Ikonskaya was here now, he was shy, but he came up and we met. And after some time I conceived a new project - “Duet in the Night” and began to sort through the heads of artists with whom I could perform this composition together. In the end, I settled on Arthur, decided "why not?" - A good performer, a wonderful person, a handsome guy. In addition to working in a restaurant, he had no way out, and I decided to help him in this way. He, of course, happily agreed.

Wrote a song Sergey Kolesnichenko, arranged by Vitaly Romanov. It turned out to be a beautiful composition, which during my recording was associated with the duet of Larisa Dolina and Dima Bilan. ”

As soon as the project was ready, the artists presented it at a joint performance in Budennovsk, and then in Makhachkala, when they participated in the filming of New Year's Eve, after which the new composition was presented at a concert in Moscow.

“Thus, more and more people began to find out about her,” Mila says, “now she is sung even in Greece and Israel. I am very pleased that it is in such demand, and I hope for the success of the track in the future. "

Now the artists are also planning to shoot a clip for this song, but for now we suggest you listen to and download the track “Duet in the Night”, which is already available on all major music services, including: iTunes, Google play, Apple music, Beeline Music, Yandex.Music, as well as in the BOOM application (for users of social networks Vkontakte and Odnoklassniki).

The premiere of the new single and video of Elena Tsaritsa - “I Adore”!

Popular singer Elena Tsaritsa @lena_lisowa_caritsa presented the project today, the release of which her fans have been waiting for over the past 7 months - a lyrical composition has appeared, ...
Learn more
News

On May 17 there will be a big joint concert of Nadezhda Art and Sergey Kolesnichenko. A famous author and performer invites all fans of his work to a musical meeting, where they will ...
Learn more
Premieres

Popular performer Reysan presented today another novelty - the song “Raider capture”, in which love is sung not tritely, but brutally and like a man! Listen and download ...
Learn more